The details to the certificate course are given below:- 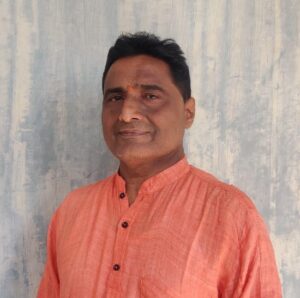 Representing the fifth generation in a family of traditional performers who have significantly contributed in the evolution and development of Seraikella Chhau dance. He had his initial training under his Father Late Guru Lingaraj Acharya and later on from Late Guru Bikram kumbhakar (Phori khanda), Late Suru Mukhi and Mangla Mukhi (Dhol and Nagada).

The eclecticism in his own training has led him to develop a comprehensive system with which he has shaped his technique as a performer, teacher, and musician.

Awarded with Kala Guru Samman 2019 by Kala Mandali, New Delhi. Got selected as the Empanelled artist of F.O.I., Ministry of Culture, Government of India.

Presently, working as a visiting faculty at Attakalari Movements of Arts, Bangalore, an Artistic Director of Acharya Chhau Nrutya Bichitra, Seraikella and Teaching at Triveni Kala Sangam, New Delhi. He is training students of both dance and theatre for the past 25 years.

1. Cheque in the name of “Triveni Kala Sangam School Account”

The Classes are open for all.